“We anticipate here in the community a really large influx within the next two to three days and we will also see it two to three to four days after the Super Bowl,” said Clayann Cook, president of the Grand Canyon Chamber and Visitor’s bureau and general manager of the Big E Steakhouse and Saloon.

“All of the hotels here in Tusayan have met their budgets for January within the first 10 to 12 days of the month,” she said.

A Seattle Seahawks fan from Seattle, Koji Yamada, came to Arizona for both the Pro Bowl and Super Bowl. He drove two days to see Arizona’s signature landmark – The Grand Canyon.

“I saw the Pro Bowl last night then I came here to the Grand Canyon,” Yamada said. 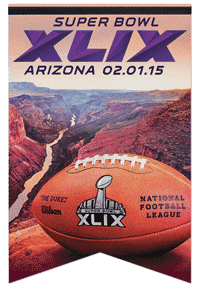 “Oh I think it’s going to be an amazing impact, it really gives us a change to showcase the Grand Canyon,” said Janet Rosener, Grand Canyon IMAX and National Geographic Visitor Center Manager.

She said because the drive from Phoenix is so easy and there are several other scenic attractions like Sedona and the Oak Creek Canyon along the way, it encourages visitors to make the trip up to the Canyon.

The financial impact of the Super Bowl and other sporting events on Grand Canyon tourism remains to be seen, but businesses are happy with the extra dollars flowing into the local economy.

Make the Grand Canyon a destination for your 2015 Vacation and see what the actual Grand Canyon experience is all about. Thank you for visiting GrandCanyon.com this XLIX Super Bowl. We had a dramatic increase of visitors during the Super Bowl than all the days before and after the Super Bowl 49!

This site uses Akismet to reduce spam. Learn how your comment data is processed.