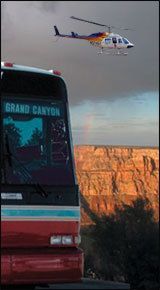 Your day starts bright and early with shuttle pickup at your Las Vegas hotel. After transferring to your deluxe motorcoach, your Grand Canyon adventure begins.

After traveling through the vast expanse of the Mojave desert, your first stop is the stately Hoover Dam, a masterpiece of modern engineering that helped make the Western United States what it is today. After about a 20 minute photo stop at this imposing yet artful structure, your next destination is more of Arizona’s living history.

In Kingman Arizona, you’ll exit off Highway 93 and turn onto Interstate 40 and cross some of Northern Arizona’s landscape.

Then, you’ll pass through Williams, Arizona and leave Interstate 40 to get onto Highway 64 North to the Grand Canyon. Williams was named for trapper Bill Williams. Today, it is best known as the home of the Grand Canyon Railway. The railroad first brought Williams to international prominence in 1901 when the first spur line to the Grand Canyon was built. For 70 years, the Santa Fe Railroad carried thousands to the canyon rim, until the popularity of passenger cars overtook that of the “iron horse.” In 1972, the train whistle was silenced, but the hiatus, it turned out, would only be temporary. In 1988, entrepreneurs Max and Thelma Biegert revived the historic railway, which is now bigger than ever.

Your next destination: Grand Canyon National Park. But first, it’s time to get off the ground and get into the air! You’ll step aboard a Papillon helicopter for an unforgettable 30-minute flight over the deepest, widest and most photogenic part of the Grand Canyon, where you’ll peer all the way down to the heart of the gorge, the Colorado River itself. You’ll also enjoy the food court lunch before rejoining the rest of your tour group for your ground excursion of the park.

Inside Grand Canyon National Park, you’ll have time to take in the views while strolling along the canyon rim, and shop for mementos of your visit at historic Bright Angel Lodge. Afterward, it’s time to get back on your motorcoach and head back to Las Vegas, where you’ll be dropped off at your hotel. Your tour price includes tax, fuel surcharge, lunch and hotel shuttle service from most major hotels on the Strip or Downtown.

TOUR DURATION: 14-15 Hours (hotel to hotel)
Pickups from Major Hotels on the Strip are 60 – 90 minutes prior to departure times.