Over The Rainbow & Lake Powell

The Southwest’s most intimate air tour. You will get down into Glen Canyon and see Lake Powell with magnificent Rainbow Bridge. Don’t miss this opportunity to see the world’s largest natural bridge carved in stone. Book Online today for the best price!

In 1910, Rainbow Bridge was designated a National Monument by President William Taft. In the years that followed, a few more rugged individuals made the arduous trek to view Rainbow Bridge, including author Zane Grey and President Theodore Roosevelt. As recently as the 1950’s, the trip to Rainbow Bridge still wasn’t easy: back then, it could be made by taking a jet boat up the Colorado River through Glen Canyon, followed by a 3-day hike into Aztec Canyon.Southern Utah, August 14th, 1909.

After a grueling journey on horseback through a sun-scorched labyrinth of cliffs and canyons, a dozen men gazed upon the subject of legend: a sandstone arch in a nearly perfect parabolic shape, stretching almost three hundred feet wide, soaring nearly three hundred feet into the air. It truly deserved the name the nearby Navajo Indians had given it: “Nonnezoshi” – a rainbow turned to stone. 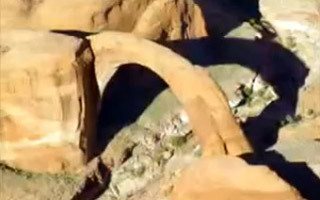 3, the waters of the Colorado River began to rise, forming what would come to be known as Lake Powell. The arrival of the reservoir would eventually make Rainbow Bridge more easily accessible. In the decades that followed, tour boats ferried hundreds of passengers a day to the monument from Wahweap Lodge and Bullfrog Marina.

When Lake Powell was at its highest point, half-day and full-day trips to Rainbow Bridge were available. As the waters of Lake Powell receded in the late 1990’s, Rainbow Bridge remained accessible by boat, but requiring a full day tour, and a 1.5 mile walk each way in order to see the bridge.

The Rainbow Bridge Scenic Air tour is an expedient and exciting way to see not only Rainbow Bridge, but so much more. In just 30 minutes time, you’ll get the ultimate eagle’s eye view of Lake Powell, Navajo Mountain, the Vermilion Cliffs and Grand Staircase-Escalante National Monument.

Join us for an aerial sightseeing experience regarded by many as “better than the Grand Canyon!”