Which Rim of Grand Canyon is best?

The Grand Canyon can be experienced at four general destinations: the South Rim, Grand Canyon West, Grand Canyon East, and the North Rim. We have listed them in terms of highest visitation.

Which rim of Grand Canyon is best for your vacation depends on several factors: 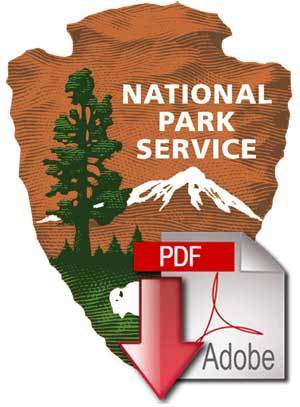 Which Rim of Grand Canyon is best – South Rim

Considered by many to be the “true Grand Canyon,” Grand Canyon National Park’s South Rim features the vast, expansive views most often seen in magazines, websites, Facebook and on TV.

From the South Rim, you can experience the Grand Canyon from close to two dozen viewpoints, each with their own unique attributes, and many that allow you to peer all the way down into the heart of the Grand Canyon, the Colorado River. Approximately 5 hours from either Phoenix or Las Vegas, the South Rim is the most easily accessible from most major Western cities.  Commuter flights are also offered into nearby Flagstaff, Arizona or Page-Lake Powell, Arizona.

Grand Canyon South Rim is most frequently chosen by first-time visitors to the area not only for its beautiful views, but for its abundance of visitor services and family-oriented activities. The South Rim is open year-round.  At 7,000’ above sea level, the South Rim has four distinct seasons.  Summertime is predictably warm and dry, with afternoon monsoon storms occurring during the months of July and August.  Daytime highs run in the 80’s and 90’s during the day, with nighttime lows in the 40’s and ‘50’s.  Spring and fall are the by far the best times of year weather-wise, with afternoon highs usually a picture perfect 65-75 degrees.  Nights can by chilly, with lows in the 20’s reported during times usually considered to be summer, so a coat is best carried no matter what time of year you visit.  March and April are prone to late season snowstorms; similarly, September typically gets those last few “gully-washers” of monsoon season.  In wintertime, Grand Canyon National Park almost becomes a different world.  Daytime highs run in the 30’s and 40’s, with subzero nights not unheard of.  Snow is possible year-round at the Grand Canyon, but the heaviest amounts typically fall between December and February. While the Grand Canyon looks spectacular by itself, the sight of the great gorge draped in a mantle of white has been known to move people to tears.

The South Rim has been hosting visitors since the 1850’s, when the journey to the park (which wasn’t a park at the time) entailed a bone-jarring stagecoach ride taking anywhere from 1 to 2 days.  Development of the area as a tourist destination began in earnest in 1905, when the Santa Fe Railroad commissioned the construction of the El Tovar Hotel.  The stately lodge, designed by Charles Whittlesey, is reminiscent of a Swiss ski chalet with overtones of an upscale hunting lodge.  It would be the first of six hotels built inside the park and administered by the Fred Harvey company, whose reputation for fine lodging and dining was established with the advent of the railroad.  The Bright Angel Lodge, designed by premiere woman architect Mary Jane Elizabeth Colter, opened in the 1930’s, offering quaint rimside cabins and economical European style rooms.  3 other Grand Canyon hotels were constructed in the 1960’s: Maswik Lodge, originally known as Motor Lodge, ¼ mile South of the Canyon Rim, and the Kachina and Thunderbird Lodges located right on the canyon rim.  Yavapai Lodge was built in 1972 and is the largest of the South Rim’s in-park hotels.  This group of Grand Canyon hotels, along with several restaurants, gift shops, museums and other visitor services, would become collectively known as “Grand Canyon Village.”

By the 1950’s, Grand Canyon South Rim’s popularity had grown to the point where more lodging was needed.  The town of Tusayan, 7 miles outside the park, began to fill that void with the construction of the Red Feather Lodge in 1963.  The Best Western Grand Canyon Squire Inn and the Quality Inn Canyon Plaza opened in the 1970’s, and the Holiday Inn Express and the Grand Hotel arrived in the mid-1990’s.  Each hotel (except for the Holiday Inn Express) has its own on-site restaurant and gift shop, plus you’ll find a wide variety of chain and independent restaurants as well as an internet café and General Store in Tusayan.

Tusayan is also the site of the Arizona’s second busiest airport – Grand Canyon National Park Airport – and the world-famous IMAX Theatre.   Many Grand Canyon area tours, such as jeep tours, airplane and helicopter tours, and rafting tours originate from Tusayan. Grand Canyon South Rim is also recommended for those traveling with young children, as there is more for them to do – and more that they can do – at the South Rim than at the North Rim or West Rim.  Day tours to Grand Canyon South Rim are available from Las Vegas, Flagstaff, Phoenix/Deer Valley and Sedona.  Hotel reservations should be made 6 to 9 months in advance during peak travel season. 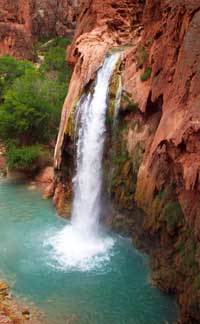 Havasu Canyon is located between Grand Canyon West and Grand Canyon South Rim.  Home to the Havasupai Indians, Havasu Canyon’s drawing card are five world-famous blue-green waterfalls: New Navajo Falls, Rock Falls, Mooney Falls, Havasu Falls and Beaver Falls.  Havasu Canyon has been called a true-life Shangri-La, a modern day Garden of Eden.  Getting to this oasis in the desert isn’t easy, though, and planning one’s trip well in advance is absolutely crucial. Havasu Canyon is only accessible by foot, horseback or helicopter.
Entrance to the Canyon for riders and hikers is via a 12-mile trail that starts at Hualapai Hilltop, located 68 miles Northeast of Peach Springs.  All visitors must purchase a camping permit or stay in the Lodge.  Visitor facilities in Havasu Canyon are located in Supai Village and include a small lodge, general store and post office.  The falls are located along a 2-mile trail from Supai Village. The campground is about 2.5 miles from the Village.  For more information on reservations for lodging, camping, saddle and pack horses, or helicopter transport, visit the Havasupai Tribe’s official website. Havasu Canyon is best visited by those who have planned ahead, and are healthy enough to make the 12 mile trek into and out of the Canyon.

Those who arrange helicopter transport to Supai Village must still remember it is a 2-mile walk – each way – to the first waterfalls.  Havasu Canyon is not recommended for families traveling with young children.

Which Rim of Grand Canyon is best – North Rim

Though part of the same National Park, the North Rim of the Grand Canyon is strikingly different from her Southern sister.  While the South Rim bustles with activity during peak travel season, at the North Rim, you can still hear the call of a canyon wren echoing through the Ponderosa Pines – it receives only 1/10th of the visitation that the South Rim does.

A full 1,000’ higher in altitude, the North Rim runs about 10 degrees cooler than the South rim, and supports plant and animal life that the drier South Rim cannot, such as aspen, birch, maple and oak trees, and the Kaibab Squirrel with its metallic gray coat and distinctive tufted ears.

Grand Canyon North Rim’s season is relatively short.  It is only open from mid-May through mid-October due to heavy snowfall during the winter months.  It is also less accessible from most major Western cities than the South Rim (6 hours from Las Vegas, 8 hours from Phoenix, 7 hours from Salt Lake City), though commuter flights are offered into St. George, Utah and Page, Arizona, both of which are about 3 hours away.

At 8,000’ above sea level, summertime temperatures are surprisingly pleasant, with daytime highs in the 70’s and ‘80’s.  Nighttime lows remain quite cold until late spring, and can dip back down into the 20’s as early as August.  For those visiting in the fall, particularly the second or third week of September, Grand Canyon North Rim is THE place to be for a radiant display of fall colors put on by the area’s deciduous trees – you won’t see that at the South Rim.

The Colorado River is visible from several viewpoints at the South Rim, while from the North Rim, one has to peek through Angel’s Window in order to see a small sliver of the river.  But those who have seen the canyon from both sides tend to agree that the North Rim is the nicer side of the Grand Canyon, in several senses of the word – calmer, quieter, and reminiscent of what the National Parks may have been like in years past.

Visitor services at Grand Canyon North Rim are fewer in number and smaller in scale than at the South Rim.  The Grand Canyon Lodge is the only in-park lodge at the North Rim.  Built in the 1920’s, and also financed by the railroad industry, the Grand Canyon Lodge has a couple hundred cabins and a handful of motel rooms as well as a restaurant, lounge, deli, campground and gift shop.

Out-of-park lodging is also more scarce than at the South Rim, with the Kaibab Lodge (5 miles outside the park) and the Jacob Lake Lodge (50 miles North of the park) taking up the overflow with a few dozen cabins and motel rooms.  The next nearest lodging is about 90 minutes from the park.

Hiking, sightseeing and ranger-led programs are the primary activities offered at the North Rim.  Very few commercial tours are offered in the immediate area of the park; most take place in outlying communities such as Kanab, Utah, St. George, Utah, or Page-Lake Powell, Arizona.

The North Rim is best visited by couples and outdoors-minded families seeking a quiet getaway.  It is also a good alternative for those who’ve already been to the South Rim.  Hikers, photographers and nature enthusiasts will probably like the North Rim.  Visitors traveling in the fall, particularly late September, should seriously consider at least a brief visit to the North Rim to experience the spectacular fall colors of the Kaibab National Forest.

Because of its high altitude (8,000’), Grand Canyon North Rim is not recommended for those with cardiac or respiratory ailments.  It is also not recommended for families traveling with younger children, especially those who need a lot of sensory stimulation (many of the rooms in the area don’t have TVs!).