In pre-historic times, California condors filled the skies over North America. The largest land-based bird on the continent, their ten-foot-wide wingspans cast long shadows over the Earth for thousands of years. Fast forward to the early 1980’s. Not only had “Video Killed the Radio Star” but hunting, egg collecting, and habitat encroachment had killed almost all of the California condors. By 1987, all California condors remaining in the wild had been brought into captivity, their numbers reduced to a not-so-grand total of 25. 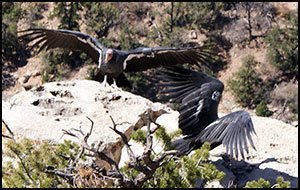 Efforts began to repopulate the species. With a notoriously slow breeding cycle (condors reach sexual maturity at about 6 years old and females typically lay one egg every other year), human intervention was necessary to jump-start the process of bringing this majestic bird back from the brink of extinction. At captive breeding facilities, primarily at the San Diego Wild Animal Park and the Los Angeles Zoos, biologists would discreetly remove newly-laid eggs from the nests of the females. Thinking that her egg was perhaps broken or taken by a predator, the potential mother would lay a second and sometimes even a third egg, giving biologists more specimens to nurture than they would have if nature had been allowed to run its course. Upon hatching, the chicks would be hand-fed by caretakers using puppets as “surrogate parents.” The approach worked: in ten years time, over 100 chicks were hatched in captive breeding programs.

By 1993, the World Center for Birds of Prey in Boise Idaho had also begun raising condors in captivity. Three years later, they dispatched a plane to the Page Municipal Airport near Lake Powell Arizona. Its cargo: 6 young captive-bred condors who would hopefully be the first California Condors to have free reign of the skies of Northern Arizona in more than half a century. Financed by the Peregrine Fund, specially designed acclimation pens situated high atop the Vermillion Cliffs would be their temporary home as they adjusted to their historic homeland. Weeks later, they spread their massive wings and flew, with condor sightings joyously reported from as far away as Colorado and Wyoming! Since keeping track of their well-being and movements is essential for the success of the program, every free-flying condor is equipped with a numbered radio transmitter so their caretakers can monitor where they go, where they roost, and most importantly, where they nest. This keeps a handful of Grand Canyon park rangers busy as the birds quickly took a liking to the Grand Canyon – a condor can soar for hours without flapping its wings on the canyon’s powerful thermal winds, and private cliffside nooks are its favorite nesting places. 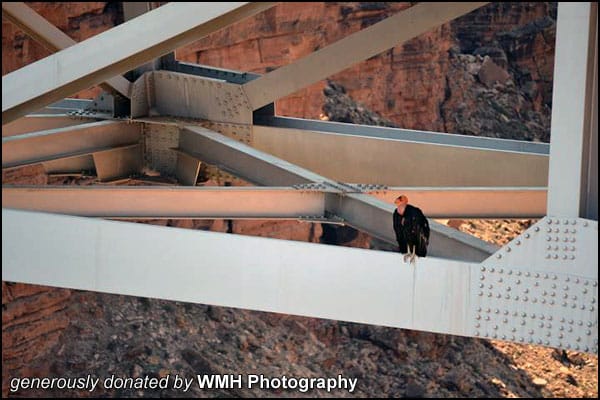 The California Condor Restoration Project has been nothing short of an emotional rollercoaster for its human overseers. Euphoric successes have been punctuated by devastating setbacks. The first egg laid in the wild in Arizona was found broken. The first wild-born condor chick died before reaching breeding age. Lead poisoning is a constant concern as is the threat from natural predators such as coyotes and mountain lions. Sometimes, biologists are reminded that in many ways these big birds are like human kids: like many wild animals living in tourist areas, a few Arizona condors discovered sources of free food (a.k.a. “people”) at places like Horseshoe Bend in the Glen Canyon National Recreation Area and Grand Canyon Village inside Grand Canyon National Park, earning them a “time out” back at the Vermillion Cliffs. But if the numbers ultimately tell the tale, then the California Condor Restoration Project has been a success, with the population now at nearly 400 birds worldwide, with nearly 70 of those roaming freely over Lake Powell, the Paria Wilderness, the Grand Canyon, and Monument Valley.

If you should encounter a California Condor during your visit to any of the above-referenced areas, please keep your distance. Do not attempt to shoot or throw anything at it (doing so will land you in jail). California Condors eat primarily carrion, or dead animals – they definitely will NOT carry off your children! If one happens to approach you, please don’t feed it or encourage it to come closer. Instead, note its radio tag number and report the details of your encounter to a park ranger or other local authority. 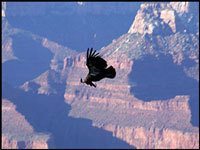 Depending on the time of your Grand Canyon visit, you might take the opportunity to learn more about condors and the role they play in maintaining the ecological balance of the Grand Canyon and surrounding area. Consult the Grand Canyon National Park Service newspaper “The Guide,” and turn to the section on Ranger Programs. Otherwise, bring binoculars when you visit Grand Canyon National Park, and if you see a bird that looks like a small plane, count yourself among the lucky ones to have seen a form of life that truly defied the odds and may one day leave the nightmare of near-extinction far in the past as the wind guides its way on.