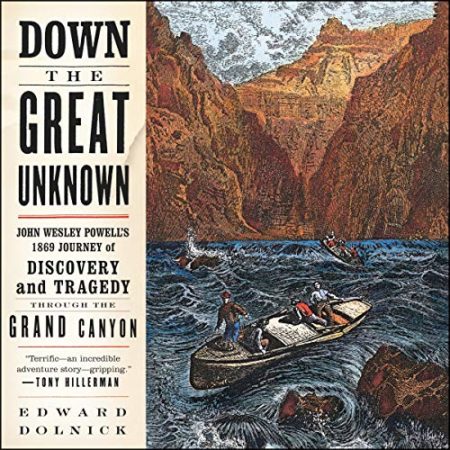 Down the Great Unknown by Edward Dolnick

This quote is by Major John Wesley Powell from his historic 1869 Expedition down the Colorado River and through the Grand Canyon.

* He was the first to go through the Grand Canyon

* He was the first to map it

* And he actually named it too

The big idea here is that John Wesley Powell didn’t know what he was getting into…and you can avoid many of the mistakes he made by learning from this historic expedition.

Don’t go through the Grand Canyon without learning from John Wesley Powell first.

Powell’s expedition began with nine men in four boats on May 24, 1869…from Green River Station Wyoming. That was 150 years ago this month. His crew consisted of his brother Walter Powell, Oramel Howland, Seneca Howland , William Dunn, George Bradley, Frank Goodman, Andy Hall, Jack Sumner and the cook/cameraman was a man named Billy Hawkins.

They had no idea of what they were getting themselves into. They would run rapids in brown water with toppled trees in it…and make their way through very narrow canyons with towering canyon walls. The water was so brown and filled with silt that they couldn’t see more than a few feet ahead of them.

At one point, while scouting the rapids ahead in a small boat, John Wesley Powell took three gigantic whacks to his head from clanging rocks and almost drowned when he went over the falls to save his boat which sank in the rapids. Two of his crew bailed out into the unknown river and made their way back to camp.

The weather was so bad that they couldn’t see more than a few feet in front of them much less map anything at the time…they tried using a compass but it would spin from being moistened from the moisture in the air.

Here’s how this applies to us and your Grand Canyon visit:

* We now have a Map of what was once…The Great Unknown!

So, let’s put this into action:

1. – Learn WHERE the Great Unknown is and HOW to get there

3. – Research WHERE you want to STAY when you get there

4. – Research WHAT you want to DO when you get there

5. – Don’t let the Grand Canyon be an Unknown to YOU

Oh, and before I forget…