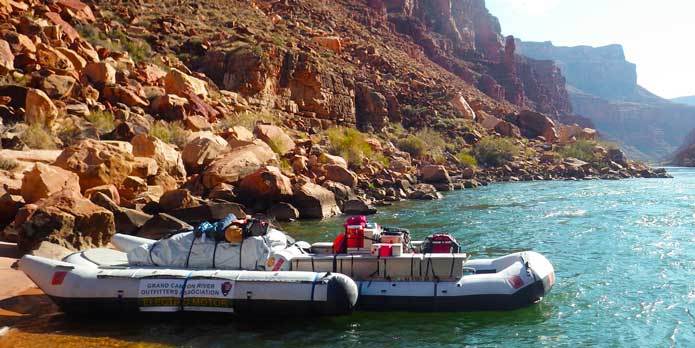 Flagstaff, Ariz. – For the first time in history, a hybrid-electric outboard motor has completed an entire Grand Canyon river trip.

For nearly eighty years, commercial Grand Canyon river rafting outfitters have been providing the general public with exceptional multi-day backcountry and whitewater rafting experiences in one of the most remote and pristine locations in the world – on the Colorado River in the Grand Canyon National Park.  Today sixteen professional outfitters provide this service to approximately 20,000 of the nearly 5 million Park visitors each year.  These companies are the official authorized concessioners and partners of the National Park Service to provide these services to the public.  The Grand Canyon River Outfitters Association (GCROA) is a non-profit trade association headquartered in Flagstaff, Arizona, which represents the entire group of Grand Canyon outfitters.

As the primary provider of public access to the extremely fragile ecosystem and river corridor environment within the Grand Canyon, the commercial river outfitters have been continuously leading the way by exercising the most environmentally friendly practices and sustainable technologies on their multi-day river trips in Grand Canyon.  “Leave No Trace” practices are strictly adhered to.  Earlier this month due to more recent threats, the advocacy group America Rivers has declared the 277-mile stretch of the Colorado River that winds through the Grand Canyon as the most endangered river in the nation.  “There is no more important time than now to do our part to protect this special place in every way we can.  We all know of the constant threats to the Grand Canyon and we all share in this ultimate responsibility to preserve it unimpaired for future generations,” said Grand Canyon National Park Superintendent Dave Uberuaga.  “And the Grand Canyon river outfitters are truly taking steps and doing things that actually make a difference to protect the resource as well as greatly improve the visitor’s experience here and now.  It is a great partnership with the Park.”

In 2008 the river outfitters committed unanimously to partner with the National Park Service and pursue the development and implementation of a non-fossil fuel alternative motorboat propulsion system suitable for commercial river running operations within Grand Canyon.  It is known as the “Alternative Motorboat Program”.  Since the creation of this program, the river outfitters have again voluntarily invested more than $500,000 and have been working with the engineering departments of several universities and a few private sector companies in research and development to literally create a technology that doesn’t actually exist for an application found nowhere else in the country.  Outfitters initially pursued a few competitive ideas but ultimately have settled on the hybrid-electric concept because it showed the most potential with the largest immediate benefits.  “We felt we should accomplish as much as we can now and not have to wait for future technology to catch up.  We cannot just buy an electric motor and enough batteries off the shelf that could sustain a weeklong river trip with no ability to recharge.  We made enormous strides with the University Programs but ultimately we have been waiting for battery technology to evolve and catch up to our needs,” stated John Dillon, Executive Director of GCROA.  “Until there is better technology that is affordable and can be readily obtained, the hybrid-electric model is our choice for now.”

The hybrid-electric concept is the use of an all-electric 30-kilowatt outboard motor that is powered by two large packs of lithium-ion batteries.  The motor is basically the newest 4-stroke 30-hp Evinrude outboard that most outfitters use today that has had the gas motor removed and a liquid cooled 30-kilowatt electric motor and a special computer control panel installed in its place.  The lower unit and propeller are the same as a conventional gas motor.  Both battery packs weight approximately 300 pounds each, and still require periodic charging throughout the trip.  This is made possible by the most advanced, quietest, eco-friendly generator available on the market today.  The Honda 7000eu generator produces 4500 watts and is still quieter than the standard 4-stroke outboard motors in use today, and uses 60% less fuel than is used for a regular outboard motor trip.  The converted electric motor, batteries, chargers and generator are all sealed and waterproof to the best extent possible.  And the electric motor is virtually silent!

Almost sixteen years ago the industry voluntarily transitioned from louder, dirtier, but also much more affordable 2-stroke conventional outboard motors to an entire fleet of conventional 30-hp four-stroke outboard motors which produce much lower emissions and are nearly 40% quieter than the previous 2-stroke motors.  That was a large leap forward in the pursuit of restoring natural quiet and reduction of fossil fuels.  That transition voluntarily replaced nearly 300 motors at a cost of $1.5 million dollars to the outfitters.  “Most people do not understand or appreciate the commitment and investment that has already been made by the outfitters to improve the resource and visitor experience.  It is significant.  And the latest accomplishments with the hybrid-electric motor are truly remarkable towards our long-term goals,” Dillon stated.

“This is so exciting!  I am so impressed with the dedication the outfitters continue to show towards the long-term goals of this program. We have all had our doubts, and there remains to be many things improved before something like this could be a viable alternative to the existing outboard motors in use today, but it is big steps in the right direction,” said Superintendent Uberuaga.  “I think we’ll look back on this someday as a huge stepping stone in the journey.  And this is a perfect time as we celebrate Earth Day this month to have made such a historical accomplishment!”

It was not a flawless trip, however, and there are still many improvements that must be made, but the future is promising.  It will likely take years for better battery storage technology to evolve to where a multi-day river trip could be done without recharging and for the overall unit costs of such a motor to be financially feasible to operate commercially.  The current 4-stroke gas motors are approximately $5000 each.  The outfitters have invested more than $75,000 just this one prototype hybrid-electric motor and battery configuration.  But the outfitters are committed to this project through 2017 and will re-evaluate the next steps.  “I am so impressed with the commitment and monetary investment that all of the outfitters have made to this program, which includes the non-motor companies in our group that don’t even run motors!  Everyone is behind this effort because it is the right thing to do,” said Dillon.  “It also strikes me as to the historical importance of this trip.  Steve’s uncle Frank Hatch is believed to have run the very first motorized raft through Grand Canyon in 1948, and some 67 years later Frank’s nephew Steve is on the tiller running the first electric motor through Grand Canyon.  How cool is that!”

This site uses Akismet to reduce spam. Learn how your comment data is processed.